Ben Bascom: Researching the life and writings of Charlotte Myers (1802–1891)

Home > Ben Bascom: Researching the life and writings of Charlotte Myers (1802–1891)
Previous Next

Ben Bascom: Researching the life and writings of Charlotte Myers (1802–1891)

I recently visited the College of Charleston’s special collections through a generous fellowship from the Pearlstine/Lipov Center for Southern Jewish Culture to research the life and writings of Charlotte Myers (1802–1891), a Jewish woman who was infamously slandered by her Christian husband Rufus Griswold (1815–1857). Griswold claims in a published and widely circulated statement about their divorce that she “had been bound, in honor and law, not to receive any man’s offer of marriage.” I do not wish to spend much space here on his accusations, though for context Griswold—one of the best-known American anthologists, editors, and littérateurs of his time—indelicately accuses Myers of not being a woman in order to pursue a third marriage after he had, from all points and perspectives, abandoned her. Instead of being charged with bigamy, then, he chose to subject the body of his abandoned wife to a rumor that would have put her in a double bind, since she could not safely counter or protest but instead must silently acquiesce within the public sphere in order to remain viewed as a woman. What I wished to find while reading Myers’s papers is her own voice and perspective, particularly in the aftermath of what was certainly a socially traumatic experience. 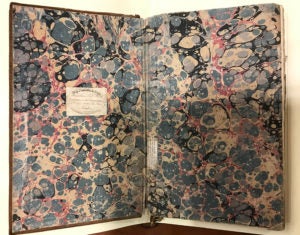 One of the amazing gems that the Special Collections holds is a large commonplace book that Charlotte Myers used to document stories, poems, pictures, and portraits that she wished to preserve. Commonplace books were often used by women in the nineteenth century as a form of scrapbooking and record keeping. These books were treasured by the individuals who filled them with material they found interesting (see Fig. 1). 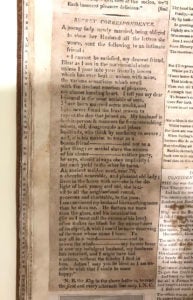 While in Charleston I wanted to immerse myself in the world that Charlotte collected, so I carefully read each newspaper article, pondered each poem, and admired the fashions and portraits that she collected and felt were worthy to preserve in her book. One poem that I found particularly compelling is called “Secret Correspondence” (see Fig. 2—for the entire page layout, see Fig. 3). The opening frame announces: “A young lady newly married, being obliged to show her Husband all the letters she wrote, sent the following to an intimate friend.” One cannot help but wonder how this poem reflects Charlotte’s marriage to Rufus. In what follows, a secret message is portrayed, where one must read “the first and every alternate line only,” as the postscript on the poem notes:

“I cannot be satisfied, my dearest friend,
Blest as I am in the matrimonial state
unless I pour into your friendly bosom
which has ever beat in unison with mine,
the various sensations which swell
with the liveliest emotion of pleasure,
my almost bursting heart. I tell you my dear
husband is the most amiable of men,
I have been married seven weeks, and
have never found the least reason to
repent the day that joined us. 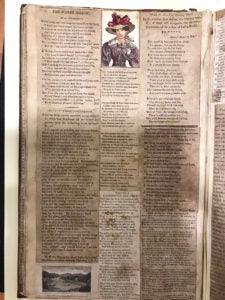 I’ve bolded the lines that provide the secret message. Without reading between the lines, one would imagine the couple in wedded bliss. But when following the direction noted at the bottom of the poem, the picture is quite otherwise.

Another fascinating clipping that Charlotte collected and preserved in her book is a fairly macabre story about a woman who discovers her lover is a thief and murderer. As with the above poem, this one may overlap with the time she was married to Griswold. The tale, titled “The Secret Bandit,” is about a wealthy woman with many suitors who one day journeys into the nearby woods, gets lost, and discovers a cave with multiple caverns, one containing great riches and the other a series of dead bodies. In her horror, the woman then hears men entering the cave and hides behind a pillar. It is then that she learns her primary suitor has a hidden life—literally skeletons hiding in cavernous closets—as he marauds about, stealing and murdering. She confronts the man the next day before her bridal party, showing the group a piece of evidence: “the very finger and ring that the robber cut off.” What strikes me about this story is the concluding passage: “As for the lady, she thanks Heaven for having rescued her in the first place from imminent peril, and in the next from a union with a guilty assassin.” 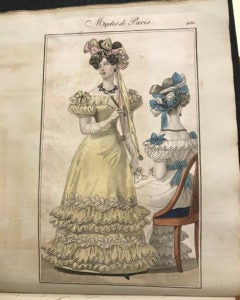 As I continued reading through Myers’s commonplace book, I was struck by other references to thwarted love and misogynistic men. In one poem, a mirror and a woman have a dialogue: “I change, and so do women too; / But I reflect—that women never do.” The “Lady” responds: “If women reflect, Oh! scribbler, declare, / What man, faithless man, would be bless’d by the fair?” One cannot help but wonder how Myers felt about such a poem that retorted back so succinctly to common tropes that attempt to deny women’s intellect, especially considering the great lengths that her husband had gone to both decry women in the public sphere and declare her own embodiment as not entirely feminine. If the closest we can really get to Myers’s sense of self is through the poetry she preserved, the one titled “Painful Love” may speak volumes about her silence: “To love is painful, it is true; / And not to love is painful to: / But, ah! it gives the greatest pain, / To love and not be lov’d again.” 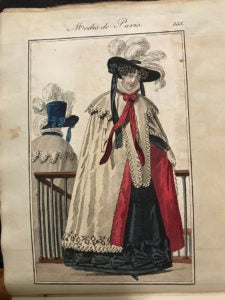 We may catch glimpses of how Charlotte Myers saw herself through looking at some of the French fashions she preserved in her book (See Figs. 4 and 5). These images capture beauty and elegance, luxury and poise, and highlight certain nineteenth-century standards of fashion in addition to a clear orientation toward femininity. I’m particularly drawn to why Myers ostensibly chose to add color to these fashions, with the elegant spring dress in a light yellow (Fig. 4) and the other one of a woman in a thickly layered winter dress (Fig. 5) with a hint of pink to her face’s cheeks, signaling cooler temperatures or perhaps a momentary blush at being gazed upon. She holds open a portion of her overcoat to show a beautiful red lining that frames a gorgeous, black floor-length gown. She is both protected from the elements and sure of herself, controlling how much of her dress is observed. 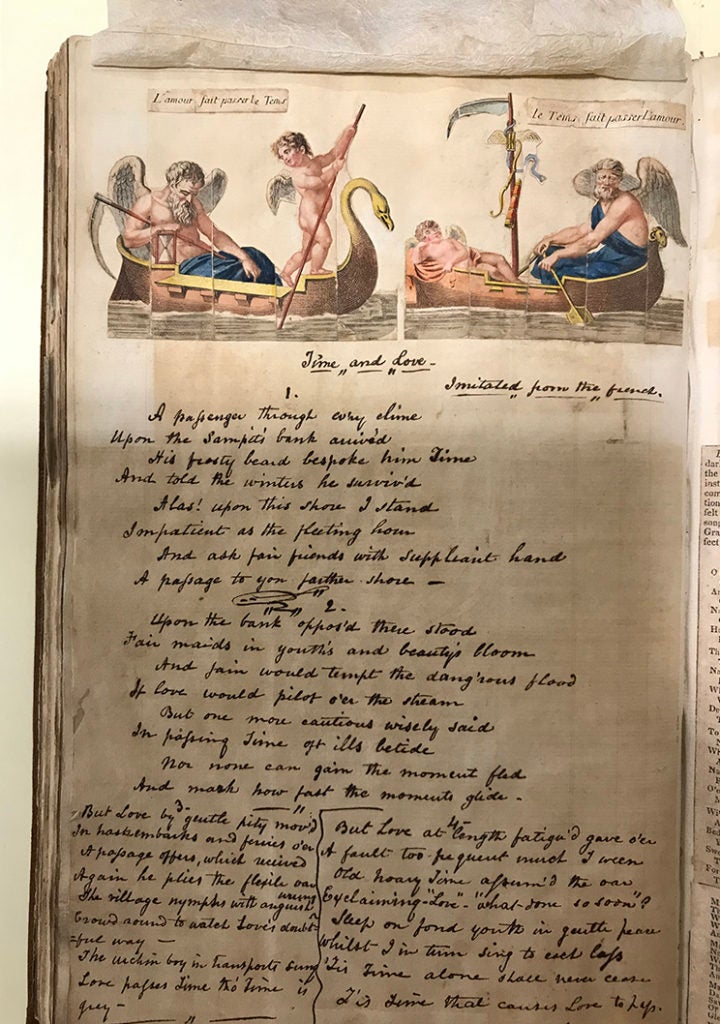 To close, I’ll gesture to a poem that might be an original imitation from the French by Charlotte Myers called “Time and Love” (see Fig. 6). What I find striking about this page is her careful placement of two pasted images, which she conceivably would have cut out to preserve in this book. The angel Time on the left is fast asleep, with a scythe cradled in his elbow and an hourglass under hand. The look of the rowing angel on the right, which would be Love, looks truly exhausted, bulky arms and hands holding oars in the water with a face lethargically looking toward the viewer. One wonders what Charlotte Myers thought of the relations between Love and Time’s passage on what the poem calls the “dang’rous flood” of life’s equally treacherous journey.

While thinking over Charlotte Myers’s life and researching her materials, I benefited immensely from conversations with Harlan Greene, whose forthcoming book The Real Rainbow Row: Explorations in Charleston’s LGBTQ History offers a compelling and convincing reading of the available materials.